The war between Google and alternative application stores is raging and Aptoide is the only one to go to the front, denouncing for several months the dominant position held by the Mountain View firm. This “self-powered” marketplace acts as a competitor to Google Play, which no longer accepts to host “stores” on its platform. Exit therefore the Xiaomi Appstore, Huawei Gallery… and all exotic marketplace, which offer applications not always correct. A good thing for Google and the user who is looking for security, but a disadvantage if you like plurality and hate the hegemony of GAFAM. 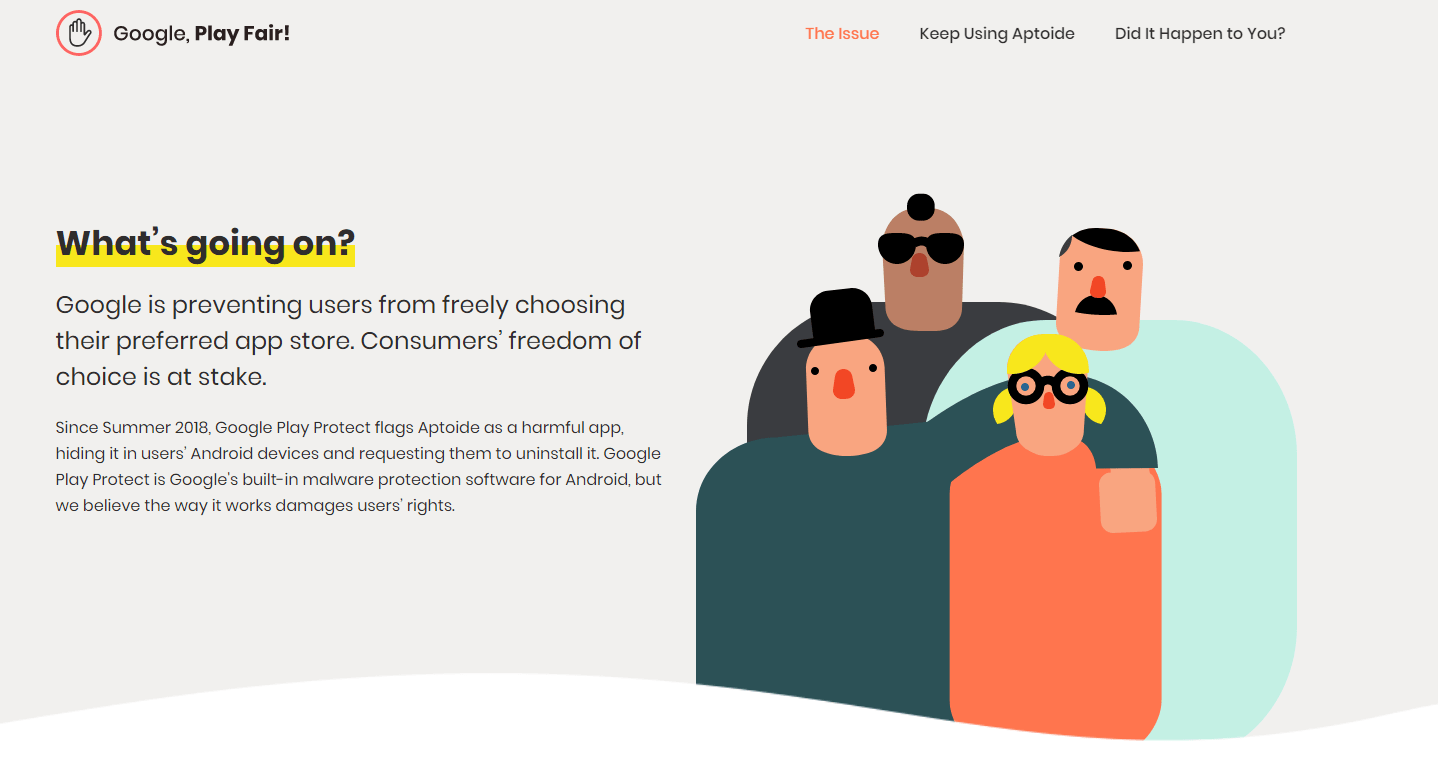 The earth pot against the steel pot

The story between Google and Aptoide doesn’t start today. Already last year, Mountain View had made the decision to consider the application as harmful in Google Play Protect, preventing by default the installation of games and applications via this “alternative” software store. Wounded in his flesh and economic model, the Portuguese publisher had no choice but to protest vigorously, lodging a complaint with a local commission, which ruled in Aptoide’s favour last October. But Google has stuck to its positions and its protection system still considers that applications installed via third-party software are not healthy and are therefore blocked by default. The Aptoide application, on the other hand, remains out of Google Play.

Tired of this situation, Aptoide and its director Paulo Trezentos launched the Googleplayfair website to raise public awareness of the issue: In the eyes of the Portuguese, Google is violating the far European monopoly and depriving users of the competition they are entitled to expect. Other services have also suffered recently, such as Humble Bundle, or simply refuse this assumption, such as Epic Game, which only offers the download of Fornite via its own installer, not available on Google Play.

In these terms, Aptoide would therefore be in its rightful right to offer another way for Android OS users to get access to various applications, but also for publishers to reach a wider audience by having several platforms instead of the inevitable Google Play. But…

Healthy, but not always legal applications

As in a destocking shop, you can find everything about Aptoide. Serious applications, games, but also editorial articles, good tips (a kind of currency specific to the site allows you to earn bonuses) and highlights fill the software once installed on the phone. Braving all the dangers, I forced myself to set up this marketplace, to realize its potential dangerousness but especially to know if what it proposed was legitimate.

Unfortunately, and after a few minutes spent on the app, we understand why Google does not want this tool to land on its platforms, or allow the installation of products from its catalog. Most references are added by third parties, not by publishers, grouped into micro-shops, user spaces where software is displayed without any other form of classification. So, if you decide to update your own apps through Aptoide, which we do not recommend, it will be done through a complete stranger. There is no indication that the products that are offered are “pure” and strictly identical to the apk offered by publishers on Google Play.

Even more worryingly, what makes Aptoide’s intentions towards publishers and developers doubtful is that some paid products are available here for free. Can we talk about piracy? In any case, products purchased and installed on my own phone (Sanitarium or Mini-Métro for example) can be updated or installed indifferently. Likewise, and after some research, we come across a few other products that are not free, but directly accessible: This is the Police, Kingdom, This War of Mine, added by “AndreyK666”, are sold everywhere else…but not here. As you have understood, Aptoide closes its eyes to the origin of its applications and does not hesitate to distribute software that has been pirated.

Free games, but not too much in fact….

We can then understand why Google is suspicious of Aptoide and seeks to protect users and publishers from a form of illegal competition within its own marketplace. Perhaps Aptoide is acting in good faith and does not control its contents, which is either a sign of stupidity or incompetence, or this company is deliberately trying to parasitize the Play Store on the pretext of unfair competition which, while certainly based on good foundations, allows it above all to lead a crusade and therefore to win the favour of an audience increasingly concerned by these issues.