Long absent from the world of free antivirus software, Kaspersky entered it a few years ago with Kaspersky Free, a simple but effective product. The Russian company had preferred to offer software that was not very rich in terms of functionality, but interesting enough to be a real protection against viruses. A few months ago, the company decided to separate from Kaspersky Free to offer Kaspersky Secure Cloud Free, a solution designed to adapt to users’ needs. But what about the effectiveness of the free version? That’s exactly what we’re going to check in this test. 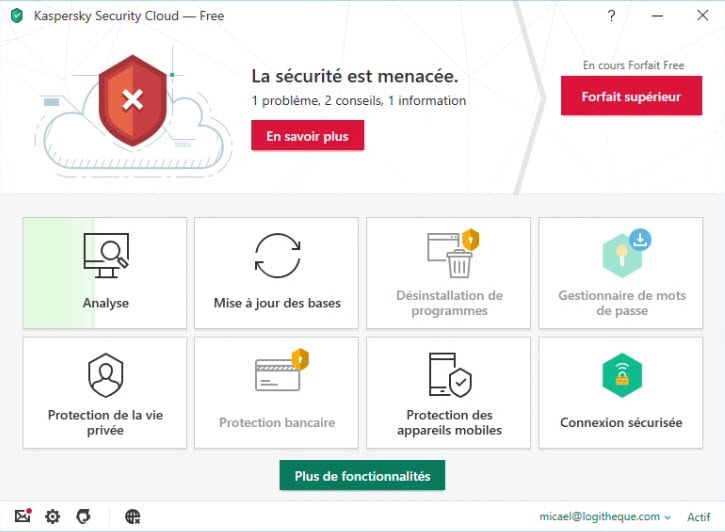 Installing Kaspersky Security Cloud Free was no picnic. However, there were no signs of complications: our machine was up to date and only had Microsoft protection.

During the process, the publisher also encourages the installation of the Kaspersky Password Manager software. If you refuse, a shortcut is offered in the antivirus interface.

Once the installation is complete, it is necessary to create an account to access the software. You can do this in just a few clicks when you first launch Kaspersky Security Cloud Free.

If you are familiar with Kaspersky Free (for which Kaspersky Security Cloud Free is the replacement), you will find that the two interfaces are not that far apart. There is a clear window with several icons that refer to the different features of the antivirus. Some buttons are grayed out, indicating that they are only available in the paid versions of Kaspersky Secure Cloud.

By clicking on “more features”, you can find all the options of the software in the form of a list. The settings can be accessed from the cogwheel in the lower left-hand corner.

We found Kaspersky Security Cloud Free’s interface pleasant and easy to use, with clearly visible buttons that make the program accessible to everyone.

As Kaspersky Security Cloud Free is a product of appeal, we were concerned that the software would offer few features. And it does; if you install this product, don’t expect a profusion of tools as is the case with some competitors’ free editions. Here, Kaspersky provides the union minimum.

It provides real-time antivirus protection that detects incoming and present threats on your computer. Several scanning levels are offered: quick scan, full scan, custom scan and external device scan. In this antivirus, Kaspersky highlights its Security Network tool, which enables it to immediately detect emerging threats through the cloud.

Kaspersky Security Cloud Free also offers an option that scans your web connection accounts to warn you if there is a risk of hacking. This is the only tool in the privacy module that is available in the free offer.

Well hidden in the options, there is also a file shredder and a virtual keyboard, two tools that can be useful from time to time. Finally, a tab called “Cleanup and optimization” offers to delete temporary files, to do a system restore or to configure the Internet Explorer browser in a secure way… A very strange choice regarding this last point since it is Microsoft Edge that is clearly put forward by Microsoft.

Is the protection provided by Kaspersky Secure Cloud Free effective and sufficient? This is obviously what we wanted to check first. We therefore placed a selection of viruses and malware on our test machine to analyze the behavior of the antivirus.

The first good thing was that as soon as we reactivated the antivirus, it immediately showed up to let us know what it found. In fact, the simple act of manipulating malicious files triggered alerts from Kaspersky Secure Cloud Free.

We ran a contextual scan to submit our infected file to the antivirus engine. The scan was successful: Kaspersky Secure Cloud Free sent a series of notifications to report its findings. There were a large number of findings, as each notification was for an infected item. This means that the software has not been idle with our file!

By default, Kaspersky Secure Cloud Free automatically deletes infected files when it fails to disinfect them. This provides effective protection for those who prefer to let their antivirus software take care of everything.

In the end, the various threats were eliminated. We completed our contextual analysis with a complete scan to verify that all viruses had been neutralized. If necessary, the quarantine zone can be accessed from the antivirus options.

In its free version, Kaspersky Secure Cloud also offers a tool called Kaspersky VPN Secure Connection. As you might have guessed, this is a VPN solution. The software is developed in collaboration with AnchoFree, which publishes the VPN Hotspot Shield. Of course, this is the free version of the VPN and is therefore quite limited. Thus, the user can enjoy 300 MB of data per day and has no choice of server. But then, in what case can this product be useful?

Obviously, there is no question of streaming with such a small amount of data. There is also no question of getting around a geographical restriction since you cannot choose a specific server or country. The only case where this VPN can be useful is as protection when you connect to a public Wi-Fi network and just do a little web browsing.

Is Kaspersky Secure Cloud Free a good antivirus? Definitely! Kaspersky Free was already a good free solution and in the end the publisher made quite a few changes. Clearly, the company wanted to make its product the gateway to the publisher’s paid-for world, and it shows. Many tools are only there to show what the paid version is capable of.

Fortunately, the antivirus was able to effectively neutralize the threats we submitted to it, and that’s what you ask of a free antivirus. The other tools offered by Kaspersky do not seem particularly relevant to us. At best they may be useful in rare situations, at worst you will simply never use them.

In any case, Kaspersky Secure Cloud Free is also distinguished by its lightness, the speed of its scans and the low frequency of incentives to switch to a paid version. In short, it’s antivirus software you can rely on.