Hérédis 2017, the latest version of the software released in September 2016, revolutionizes genealogy by proposing new features that will dust off this field considered by many to be outdated. With more than 20 years of experience, Hérédis has decided this year to focus on optimizing user productivity and, above all, on monitoring their performance. Are these objectives being met? Is Hérédis 2017 really more intuitive than the previous version? That’s what we’re going to reveal to you now. 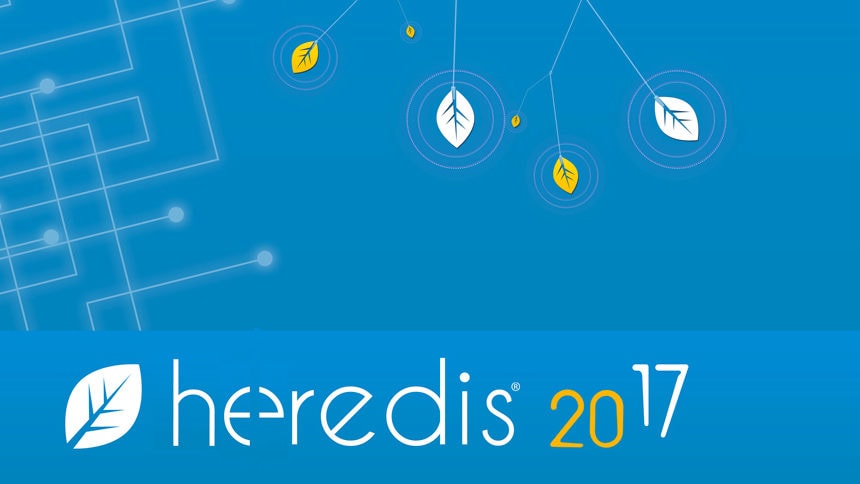 The Hérédis 2017 home screen is undoubtedly much more modern than that of previous versions. Users of the 2014 version of Hérédis could even have a shock when switching from one version to the other. True to its blue color code, Hérédis focuses on the essential: explaining the use of its software to its users, an Example file to find out what can be done with this software and the tree creation functions. Thus, Hérédis applies a certain chronology to its homepage that allows new users to gradually enter the world of genealogy and learn to use this software step by step. Of course the GEDCOM file is always present. It should be remembered that the latter facilitates the exchange of data between several genealogical systems or software.

Let’s now move on to the family tree creation interface, which has not really changed for the moment. Indeed, if some features have been added, overall the interface remains the same with all the options of the pro version on the left, in the middle the workspace mainly composed of the family tree, on the right the information of the individuals composing the tree, all capped by the software toolbar. A rather efficient organization that facilitates work by making all the functionalities accessible at first glance.

But let’s now focus on what interests us the most: the new features of the Hérédis 2017 software. Concerning the creation and modeling of the family tree itself, there is nothing new to note. Indeed, the different views have not changed and the entry of the individual records is always done in the same way. Nevertheless, the software includes an intelligent search and serial processing tool that simplifies the modification of records. Now, with the latest version of Hérédis software, it is possible to screen your data using combined search criteria and find in a short time the names of men in the family whose parents are known, for example. A real time saving very appreciable!

Another novelty and not the least the dashboard. The latter has been developed to help users manage their genealogy, and after a quick test of the tool we can say that it is conclusive.

First of all, the “Research Tracking” integrated into the latter helps users to know where they stand in the construction of their family tree. In the blink of an eye, they know what they have done and what they still have to do. A kind of interesting project tracking tool for genealogy that requires a lot of time.

What do I have to do now?

Then the “Statistics” part of the dashboard offers interesting information on the very conception of the family. Indeed, by referring to the latter it is possible to determine the number of men and women in the family concerned, the years in which there were the most births and deaths, but also the most common names.

Key data about your family

Finally, version 2017 of the Hérédis genealogy software offers users the possibility to create a real book about their family thanks to the new “Filiatus Books” tool. With it, it is possible to choose the type of book and its presentation, emphasizing it on some or all of the family members. The aim is then to offer users a perhaps more poetic way than the family tree to preserve their memories, and to continue the filiation by transmitting this book to the younger generations.

My genealogy book version? If it is possible….

Let’s finish this test with the most important criterion for experienced users, I named the intuitiveness of the software. Hérédis is known to be the easiest family tree software to use, thanks in particular to its input tools that facilitate the creation of the family tree. Well, this new version of the software is no exception. Yes, Hérédis 2017 is indeed an example of intuitiveness, thanks in particular to the various entry options of the pro version, which make it possible to create individual records in less than two, via the use of a birth certificate, a death certificate or a marriage certificate. Really very practical!

Seizure according to a birth certificate

On the other hand, the value of duplicating features in the toolbar at the top of the interface and in each tab visible above it can be questioned. Indeed, as the Hérédis 2017 software was being tested, we quickly realized that the number of features of the software was actually much less important than we initially thought. It would also be more intuitive from our point of view to keep only one toolbar in order to simplify the visibility of the available options, and to increase the user’s concentration on the tree being created.

1st available path for “seizure from a deed”

2nd path available for “seizure from a deed”

Hérédis does not derogate from its reputation as a leader in the computer genealogy market. The new version 2017 of this software adds real added value to the program, which has already been highly rated in previous years. The constant questioning of the publisher allows us to have a program every year that is constantly reinventing itself and that offers tools that are increasingly relevant to users. Offered at 39.99€ in its Standard version and 99.99€ in its Pro version, Hérédis 2017 offers a really interesting price-quality ratio. Perhaps there is still a need to clean up the software’s working interface and balance the two versions in functionality, so that we can get closer to perfection.

The conflict between India and China is escalating. For several months, an unprecedented power struggle has been opposing the two…