Mozilla is seeking to diversify its sources of income. In October 2018, the foundation announced the arrival of a new service in Firefox, its flagship browser: a VPN. It had also started a series of tests on a limited number of users located in the United States. 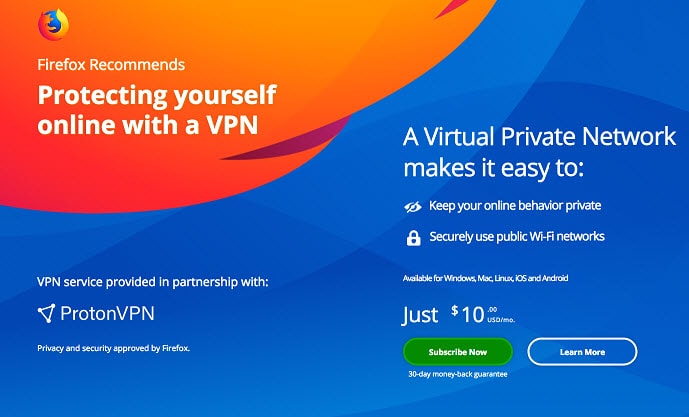 Mozilla wants to diversify its income

As Ghacks points out, Mozilla is dependent on revenues from research contracts. About 90% of the Foundation’s total income comes from research contracts. The remaining 10% comes from Pocket PCs, donations and other sources of income. The arrival of a new service such as a paid VPN could allow Mozilla to diversify its revenues, without restricting the current features of Firefox.

Since October 2018, a handful of users located in the United States have been able to access the new VPN service offered in partnership with ProtonVPN. A notification appears in the browser interface and recommends ProtonVPN if they connect to an unsecured Wi-Fi network. The user interested in the service is then redirected to a subscription page from which he or she can subscribe to ProtonVPN.

But Mozilla sees further: the Premium version of Firefox could also offer a data storage service. However, this last information has not been confirmed.

Chris Beard, Mozilla’s CEO confirmed in a recent interview that the organization would unveil Firefox Premium in the near future. An official launch is planned for October 2019, one year after the first tests with ProtonVPN. Mozilla would also plan to launch other additional services free of charge in the beginning to offer more advantageous (paid) options in the future.