Home » Test/Comparison » Test OnePlus 7T Pro: we take the same ones and start over
Advertisements

Test OnePlus 7T Pro: we take the same ones and start over

Always eager to make its place among the top-of-the-range smartphones, OnePlus continues to expand its range with the OnePlus 7T Pro. After an already very correct 7T despite some photo gaps, will the company be able to correct the step and propose the ultimate flagship? Answer in this test. 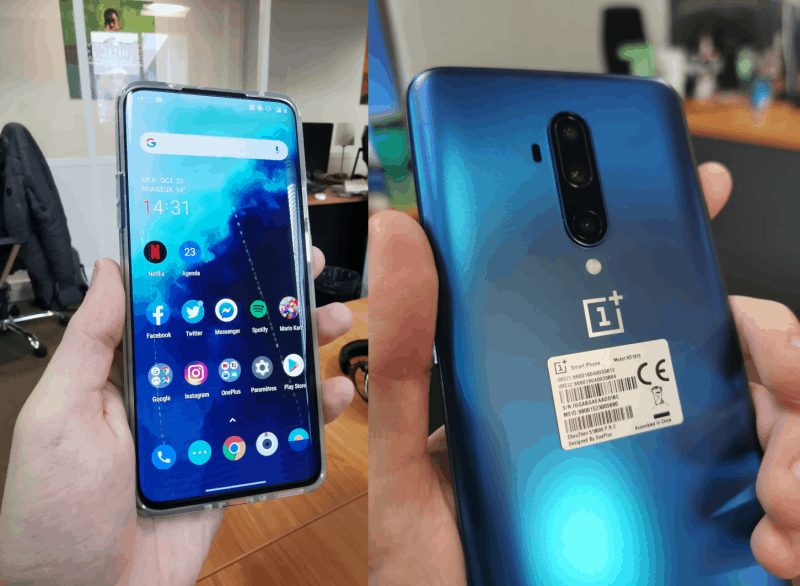 The first thing you notice about the OnePlus 7T Pro is its gearbox: it is certainly one of the largest on the market today and does not go unnoticed.

Like the box containing the OnePlus 7T that we tested at the beginning of October, the box for the Pro version bears the brand’s logo and also has an inscription: “This is the OnePlus 7T Pro. It is the culmination of our design and engineering talents, and creates for those who, like us, are always looking for the best. »

Inside, there are few surprises:

Unfortunately, a larger and heavier hair in hand than its predecessor, the OnePlus 7T Pro, suffers a lot from the comparison with the latter (a point to which we will return several times during the test).

The front panel of the OnePlus 7T Pro features a 6.67-inch AMOLED screen without borders (including rounded corners) and a 90Hz refresh rate. The latter has a resolution of 3120 x 1440 pixels 516 PPI.

Small difference compared to the 7T: there is no lens for the selfie camera on the screen. The latter is implemented directly in the smartphone and is deployed when you launch the camera or facial recognition. We will come back to this later.

For connectivity, OnePlus 7T Pro has a USB 3.1 type-C port and two slots for nano-SIM cards.

On its edges, there are 3 main buttons: the volume button on the left side, on the right side, we find the phone activation button and a small switch to quickly switch between ringing, vibration and silent mode.

On its rear face, the 7T Pro has a much more sober layout than its predecessor. Exit the photo module in a circle, we find the 3 photo sensors (main camera, telephoto lens and ultra wide angle lens) arranged vertically, as was the case on the OnePlus 7.

While the OnePlus 7 had a Snapdragon 855 processor, the 7T Pro overclocks it a bit for a slight increase in performance and naming (Snapdragon 855+). However, it remains equipped with 8 cores and engraved in 7nm.

In use, it’s simple: there is currently no application or game that OnePlus 7T Pro won’t run at maximum quality. The smartphone perfectly manages even the most demanding games such as PUBG as well as the multiplication of applications and navigation between them. Not surprisingly, the OnePlus 7 and 7T were already doing a great job in this regard. However, further tests show that the 7T Pro does not handle overheating as well as its predecessors. A small defect that is not really felt but we are entitled to wonder about its impact on the battery.

The latter has 4085 mAh and supports fast charging. This is a little more than the OnePlus 7T and one of the few differences with the latter. In particular, this allows the Pro to recharge a little faster than its older brother, who was already well on his way and was fully recharging in just under an hour. A very good performance compared to the competition (in particular the recent Pixel 4 whose recharge in 30 minutes does not exceed 45% of battery).

The most fussy users will be able to complain about the absence of wireless charging, which is definitely absent on the OnePlus smartphones and yet is becoming more and more widespread among competitors.

In daily use, OnePlus 7T Pro easily holds one or two days. You will be able to use it to the fullest extent of its potential by playing or viewing content on the web.

The OnePlus 7T Pro differs from its counterpart in its storage. Its 256GB capacity is twice as large as its predecessor with its already respectable 128GB.

Software and daily use

Like the 7T, this Pro version is equipped with Android 10 with an Oxygen OS overlay. As a reminder, this new version has new shortcuts to go back and to the home page. For more information on Android 10, we refer you to our test of the OnePlus 7T, which was the company’s first smartphone under this new OS.

For those who are resistant to change (or Android 9 regulars), rest assured: the buttons at the bottom of the screen can be reset according to your preferences.

On this subject, the 7T Pro (like the 7T) has a rather welcome customization menu. The latter allows you to easily customize the look of your smartphone by going from the wallpaper to the colors of the buttons, the font or the shapes of the application icons.

With its AMOLED screen, the rendering is impeccable and we will appreciate the quality of the colors on the games and applications. The light is also impeccable, but we will tend to quickly uncheck the option allowing its automatic management.

Unlike the OnePlus 7T and many other competing smartphones, the 7T Pro has no slots for the selfie camera. This makes it possible to have a real screen “without borders” which is a real pleasure during game sessions or watching movies.

In use, the phone holds well in hand but remains relatively large for one-handed use. If the power and “do not disturb” buttons remain easily accessible to your thumb, it will usually be necessary to slightly shift your hand so that your fingers fall on the volume buttons. In addition, the weight of the 7T Pro is well felt in use.

The fingerprint reader is very discreet and integrated into the phone’s display. It is very fast to trigger and it has not caused any problems or latency during our test sessions.

Facial recognition does its job well despite the disappearance of the lens integrated into the screen. The camera had no problem identifying our face during our tests and the phone unlocking is almost instantaneous. However, the speed of execution remains a little slower than that of other smartphones with a lens directly integrated into the screen. Too bad, but it makes sense.

A point about photography and video

Since the 7T Pro has very few new features compared to the OnePlus 7T, we refer you once again to our test of the latter and will deal mainly with its differences here.

Among its last ones, we can note that the Téléphoto du Pro lens regresses from 12 MP to 8 MP. Add to that its opening which goes from f/2.2 to f/2.4, which will sometimes play on your photos in low light. However, these changes are minimal and will only be visible on a handful of your shots or displayed on a large screen. However, it is worth noting the addition of a laser sensor next to the lenses allowing the PDAF+LAF+CAF multifocus.

The quality of the photos remains generally the same as on the OnePlus 7T. Do not hesitate to consult our test about it.

To make it short: OnePlus 7T Pro takes very good shots outdoors and in daylight, whether it’s a portrait or a wide-angle shot. When the light starts to disappear, the shots are still well made, thanks in particular to an efficient Night Landscape mode (but whose finishes remain approximate when you zoom in a little too much).

Click on the images to display their original size.

Small difference: the company promises on its website a 3x optical zoom for the 7T Pro (against a 2x zoom on the 7T). Unfortunately, this is a small lie because the digital zoom is actually only 2.2x. The remaining 0.8 are digitally added with the telephoto lens. In reality, the result is only slightly visible, the software part managing the port up to x3 rather well. However, we will be a little surprised and disappointed by OnePlus’ communication on this subject.

The front camera, if no longer integrated into the screen but deployable, remains the same as on the OnePlus 7T. She does a very good job and relaxes her subject well even in the presence of many hairs.

The video part is also identical to the one on the OnePlus 7T.

Our opinion on the OnePlus 7T Pro

If we only had to take into account the smartphone itself, the result would be impeccable. OnePlus achieves an almost flawless result on all points except for a few imperfections in the photo.

The biggest flaw of the OnePlus 7T Pro remains its (too) many common points with its non Pro version. Available for 160 euros more than its predecessor, the 7T Pro is only distinguished by its curved screen without notches and its deployable camera.

The OnePlus 7T Pro is for you if you want to enjoy a large curved screen with no notches and little use of your selfie camera. Given the price difference, we would recommend that you look at the OnePlus 7T, which already remains an excellent product of the firm.

Where to buy OnePlus 7T Pro?

The smartphone is less than 700 euros on Chinese shops:

Find the OnePlus 7T on Gearbest