With its Panda Dome solution, the security software publisher Panda aims to protect all of a user’s machines. Apple devices are not left out and the Spanish company also offers solutions for macOS and iOS. Integrated directly into the Panda Dome solution (and also available as a standalone version) Panda Antivirus for Mac promises effective protection and secure browsing. That’s exactly what we’re going to check in our test. 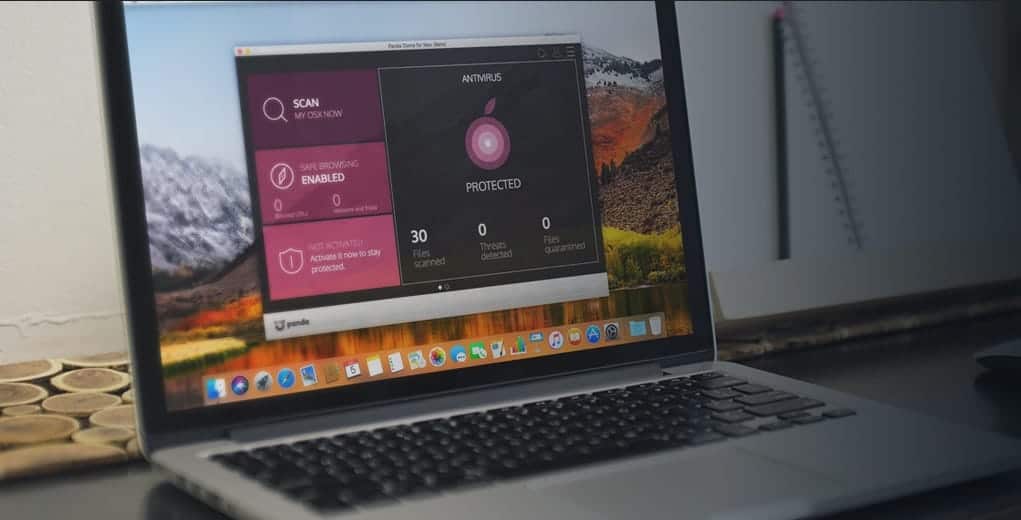 Installation and interface of Panda Antivirus for Mac

At the time of installation, Panda Antivirus for Mac requires validation of an extension in the macOS settings: this is a completely normal request for an antivirus, so it is strongly recommended to validate access. Once this is done, the creation of a user account is necessary. If you have used the product before, you can reuse an existing account.

At the first launch, we quickly notice that Panda Antivirus for Mac offers a very different interface from its Windows counterpart. Here we don’t find the many small icons but rather a window with a few tiles. This is mainly due to the fact that the antivirus offers much less functionality on the Mac than on Windows, but this is the case with most security solutions.

Aesthetically, Panda Antivirus for Mac remains pleasant to look at and to use. The different modules are few in number but simple to use, as is the “settings” section, which is easy to use. On the other hand, the whole remains less pleasant than the Windows version.

Features and performance of Panda Antivirus for Mac

Panda Antivirus for Mac is a small security suite. It provides antivirus protection capable of detecting and neutralizing viruses and malware in real time. The program also offers a module called “Safe Browsing” that allows you to block fraudulent pages that try to infect your computer or pretend to be an official website. Finally, there is also a VPN module that allows you to protect your Internet browsing by simulating your position in another country. We are therefore on a classic protection and similar to what the competitors offer.

We started to check the security capabilities of Panda Antivirus for Mac. To do this, we placed a folder full of viruses and malware on our test Mac to check its behavior.

We started by manipulating some compressed files containing malware. Panda showed up several times to quarantine the suspicious items. We then ran a full scan that lasted several tens of minutes and then stopped for no reason. We restarted the operation several times but the analysis refused to go through to the end.

Fortunately, this didn’t stop the antivirus from neutralizing some of the threats. However, we remain doubtful about the overall effectiveness of this antivirus scan, which never managed to go all the way.

The safe browsing feature did not convince us. Indeed, it was impossible for us to realize whether the option was actually functional. Despite being activated in the antivirus settings, Panda never showed up on either Safari or Chrome when we tried to access fraudulent pages. At best, it was browser protection that prevented us from accessing it, at worst we were able to do so without difficulty. In any case, we couldn’t find any information in the antivirus software about how “safe browsing” works.

We will finish with the VPN, a tool that joined Panda’s ranks not so long ago. In fact, it is a collaboration with Hotspot Shield that allows the Spanish publisher to offer a VPN in its security suite. This is a good surprise since Panda does not put any limitation in its use. The module offers a choice of about 20 countries to connect with the correct connection speed. For Panda, this is a new tool to ensure the security of its users, especially if they are on the move and enjoy connecting to public Wi-Fi networks, often with little or no protection.

Ouch, it seems that the power didn’t flow between Panda Antivirus and our test Mac. At the moment, it is difficult for us to recommend this product to protect your Mac. In fact, it is impossible for us to carry out a full analysis of our hard drive, even if Panda was reactive when transferring threats to our machine.

It was also impossible for us to check the effectiveness of the web browser module, which seemed to completely disappear behind that of Safari and Chrome. Fortunately, the VPN is functional and easy to use. But what we expect from an antivirus is to offer good tools to protect a user and at this level, Panda Antivirus for Mac didn’t convince us. It’s a pity because the Windows version we tested a few months ago is very effective and with a variety of useful tools.