Discblaze is an engraving software that integrates all the features that a good engraving program should have without doing too much. This will allow the user to burn different types of files to CDs or DVDs with some ease. For example, it will be able to create data discs in Joliet ISO9660 or UDF format as well as audio CDs. The HFS+ file system is also supported, allowing the disk to be represented by a custom icon. This software also manages the deletion and rewriting of rewritable CDs or DVDs.

DiscBlaze offers the possibility to perform pre-burning tests before starting the physical writing of the disc, allowing to detect possible reading errors of the source files. The program is able to collect and display a lot of information about the burning devices installed on the Mac. A feature for creating image files in DMG, CDR and ISO formats is also available.

The program’s interface is simple, making it easy to learn. It consists of a column showing the list of burning projects and a central space that displays the files contained in each project. As for the various options and controls, they are accessible via a particularly ergonomic menu bar. 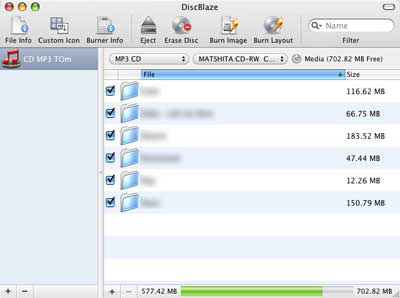