Did you know that most horoscopes rely only on the position of the sun for their predictions? This is already a special feature of Co-Star: the application is based not only on the sun but also the moon and the other planets of the solar system as well as the twelve houses of the zodiac.

Co-Star is a real institution in some countries. It is one of the most popular astrology applications by the public and the press because of its predictions but also because of its minimalist and elegant design.

Based on NASA scientific data, Co-Star gives you daily predictions for upcoming events so you can organize and react to them. Complicated relationships? Lots of work ahead? You will be able to anticipate all this and prepare yourself with the predictions of the application.

Using a precise algorithm, Co-Star easily provides you with detailed explanations of the content of your upcoming events. 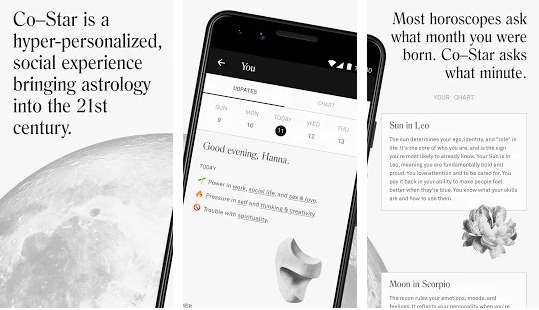