With your iPhone, decipher foreign language listings quickly with Google Translate. The application will be your ally during your travels and will allow you to communicate easily with your contacts. With more than 70 languages, the application instantly translates the words or word groups you are typing. The application automatically recognizes the original language, but for the destination language, you must click on the second button of the interface and choose from the drop-down list. It is also possible for you to talk on your iPhone and Google Translate deciphers and gives an audio translation. An oral translator is included to help you learn pronunciation. The input mode is done with the alphanumeric keyboard or in handwriting on your touch screen, just specify the one you will use. A recording of translated words or expressions is made using the memory function. A function that prevents you from repeating a translation several times and consulting them in offline mode. The interface of Google Translate, like that of its desktop counterpart, is very basic. It consists of two boxes including the original language and the target language. A few icons decorate the whole and indicate the different options of the application, in an intuitive and very simple way. 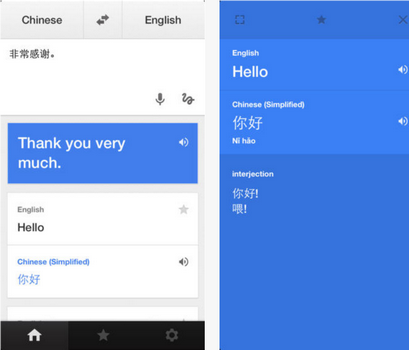