Hatsune Miku is a true personality to many fans around the world. The virtual singer from Vocaloid already has many games on several platforms (consoles and mobiles). These games are mostly rhythm games that allow fans to relive Miku’s best songs.

Hatsune Miku – Tap Wonder is a brand new game just released on Android and iOS mobiles! The game is notably available in several languages ​​such as English or French.

Unlike most games labeled “Hatsune Miku”, Tap Wonder is not a rhythm game! You will relive many concerts of the singer to relive a completely crazy atmosphere. You will only have to tap your screen to collect points!

These points will allow you to unlock all kinds of things like skills to equip for Hatsune Miku, objects, costumes and the possibility of seeing other singers like Kagamine Rin, Kagamine Len, KAITO and MEIKO.

The game also allows you to unlock all kinds of illustrations to admire and share with your friends! 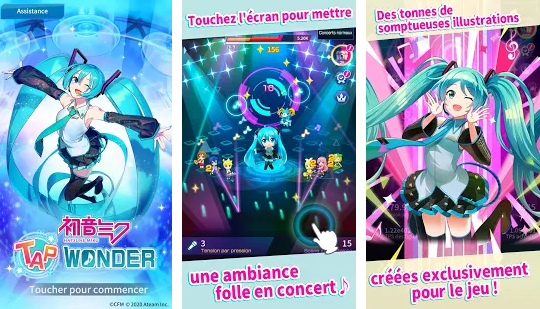