Available since 2012 in Japan, the manga “Seven Deadly Sins” has many fans around the world now. The work has even been adapted into an animated series from 2014.

However, the work has known very few video game adaptations except for a title on PS4.

“The Seven Deadly Sins: Grand Cross is a mobile card game already available in Japan and Korea. The title is about to be released in global version and it is already possible to pre-register.

The title is a card game in which you will find the whole universe and characters of Seven Deadly Sins. Play as your favourite characters in a beautiful 3D world and take on your opponents in turn-based battles. The game even has a multiplayer feature so you can be apprehended with a friend! It’s even possible to unlock multiple outfits for your characters so you can customize your heroes as you wish!

As the title is already available in Japan and Korea, it is possible to play it now with the APK we offer. 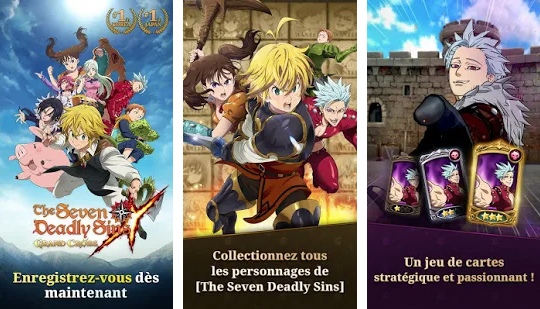