The online application “Level and relief curves” allows you to create various topographic products independently of the CAD or GIS software used. Initially, the user starts by choosing a text file containing the point coordinates. After entering an access code, the user can choose specific products at the scale of his choice: – a transfer of the sowing of points in DXF, shapefile, PostScript or in a raster format, – contours in DXF, shapefile, PostScript or in a raster format. – a DXF xy grid around the area described by the imported points – a digital terrain model in the form of a regular grid (raster image) The ordered products can then be downloaded. The raster images are accompanied by a “world file” allowing their automatic georeferencing in QGis and other GIS software. As the application does not require a Java console, ActiveX control, or plug-in, the user does not need to install any software. The application is multilingual in French / English / German / Modern Greek and has extensive documentation. A wizard also guides you step by step, so most users do not need to use the help documents. 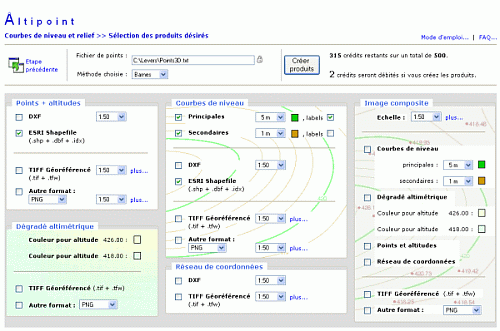