Tarot tournament manager The essential tool if you organize tarot tournaments : – Create a tournament : – Register players and save them in a database for future tournaments – Set the number of rounds and the number of games per round ! draw table compositions ! o Completely random draw for each round. oTirage for the first round and then shifting players to other tables in the following rounds. ,o Random draws for each round without two players meeting. ,oO Possibility to create one or more rounds where the best players compete. – Printing of sheets for scoring points, for calling players to their table,… – Possibility to add players after the beginning of the tournament. These players play together in the first round and are distributed to the other tables for the following rounds – Possibility of replacing one player with another during the tournament – Recording of scores from the scoring sheets. Two methods are possible: For each round and each table, either the total of the players or the score of each game with automatic calculation of the totals – Printing of the ranking after each round, in order of ranking or in alphabetical order – Printing of invitations (customizable letter and envelopes) of the players registered in the database for the next tournament with their statistics from previous tournaments. – Memorization of all tournaments with possible consultation. Even if it is intuitive to use, the software has an online help to guide you through each step. After testing it you will be convinced that for 30 €, the price of 2 or 3 registrations is well worth it, possible improvements upon request. Contact: pierre.jacquet@free.fr 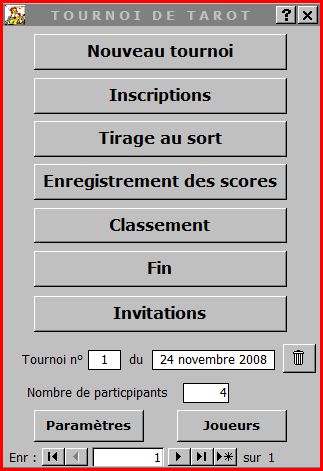