Computer graphics evolution resulted in change of our dimensions perception greatly. Back those days when computers had sixteen colors monitors, flat style graphical elements were most common. There hardly ever was an idea of putting the third dimension into play before true SVGA appeared as a new standard. From that point on, user interface designers were trying to make the 2D graphics more dimensional by adding perspective. Soon the enterprise polygraphists followed: common street art, posters and graphical ads started getting three dimensional. Multiple studies indicate that 3D elements of graphical image are perceived better thus making it easier for the designer to implement the idea of his artwork. Today, most visual media utilize pseudo-3D graphics to reach the desired impact on consumer’s perception. That is why many web and polygraph designers seek proper tools to add a dimensional aspect to their artwork. Sadly, most specialized software solutions come at prices hardly affordable for creative individuals. However, the situation has changed. Introducing Lokas 3D Maker, the unique Adobe Photoshop plug-in intended to add a completely new dimension to your artwork! 3D Maker allows creation of pseudo 3D graphical elements out of 2D drawings. Fully configurable X and Y angle controls as well as perspective depth control, shading and overlay modes constitute to exceptional freedom of transforming dull 2D to stunning three dimensional graphics. All you have to do is add a touch of imagination and voila: you get the amazing visuals for your web site or promotional leaflet within seconds. Due to extensive use of advanced math models Lokas 3D Maker makes it as easy to implement your ideas as 1-2-3. 3D Maker is perfect for both computer graphics specialists and newbie designers exploring the endless universe of creative graphical design. Throw in more than humble price and free trial version and you get the big picture! Download free trial version now! 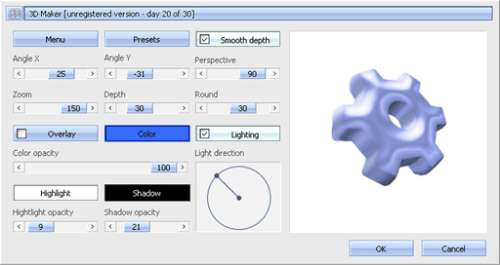