MeggieSoft Games Rummy 500, is a comprehensive implementation of the popular card game also known as 500 Rum. Play against an online opponent or against your computer. Rummy 500 has a rich user interface and many customizable graphic, sound (including MIDI music and speech output), rule and scoring options. Six different computer opponent skill levels are available for when you are unable to get online, or just want to practice privately. Rummy 500 is a game of taking and melding cards with the object of scoring more points than the computer opponent. When taking cards, one may either take a new card from the stock, or pick any number of previous discards. Melded cards score points, and a round ends when one player has no more cards in hand. The first player to 500 points wins the game. The user interface, common to all MeggieSoft Games, supports both point-and-click and drag-and-drop mouse operations. Features include: realistic animated card movement; right-click pop-up menus; a hint facility; a tutorial; automatic play; automatic save and restore of partly finished games; multiple-user scoreboards; a clean and uncluttered main window; status-bar shortcut buttons; and fully customizable main display font and wallpaper effects for the table and playing mat, and the card backs. 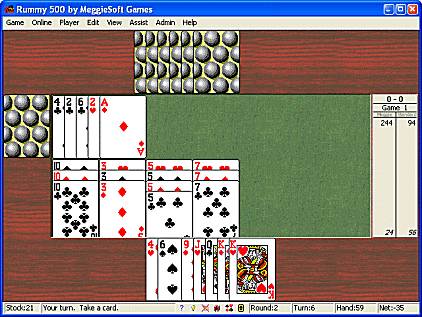